I didn’t know Steve Ditko. I only met him through the pages of Spider-man, Dr. Strange, Hawk and Dove. In later years he developed Shade the Changing Man, and squirrel Girl for the big companies. His other characters include Mr. A, the Question, and many more.
He became a recluse and declined interviews in the 80sI think, and worked mostly on his own B&W comics.
He was found dead in his apartment on June 29th, and may have been dead for 2 days according to the police.

Here’s one from one of his Mr. A comics, and a tribute I did as a portrait of a friend.

A story that was quite common in the early 20th century, beautifully illustrated. A graphic novel not to be missed. You can only get it for Kindle or via Comixology right now, but the physical book is (supposedly) on its way. 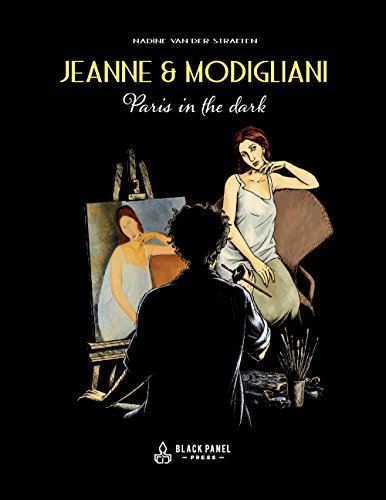 Achieving little recognition in his own lifetime, Amedeo Modigliani went on to become a highly influential expressionist artist after his untimely death in 1920. Jeanne Hebuterne was his last companion, his ever-faithful supporter.

Although a talented artist in her own right, Jeanne is pulled into the abyss of Modigliani’s destructive ego, to tragic ends. …

Jeanne Hebuterne… she who quietly slipped through her 19 years in the background of the scene, as if to apologize for being there. This is her story… Saw this Kirby page on the Bristolboard Tumblr and since I’ve never inked one before thought I’d like to give it a try. Digital inks, about 3 hours.

for the Coffee By Design folks (I love their Rebel Blend coffee), who are sponsoring @MEComicArtsFest, and providing free coffee to the exhibitors. (YAY!) Here’s a new comic I’m working on. Been penciling about 2 pages a day, and am 8 pages in. Hope to have it finished by the end of April. I’m plotting other stuff, too. Hope to have a bunch for MECAF. Don’t wallow in the past. Aim for tomorrow. Don’t be beholden to what was created before you. Create the worlds you want to see. Create the experiences you want to share. Create in the medium you love the most. Create relentlessly. Don’t hold yourself back or tell yourself you’ll get to it later. Don’t wait to be brilliant. Don’t talk about what you want to do. Do it now. Do it in your own way.

(Cartoony, lego, violence, so maybe not for kids.)

Did a G-D Batman sketchcard this afternoon: